A Day in the Life of: Game Software Developer at Riot Games 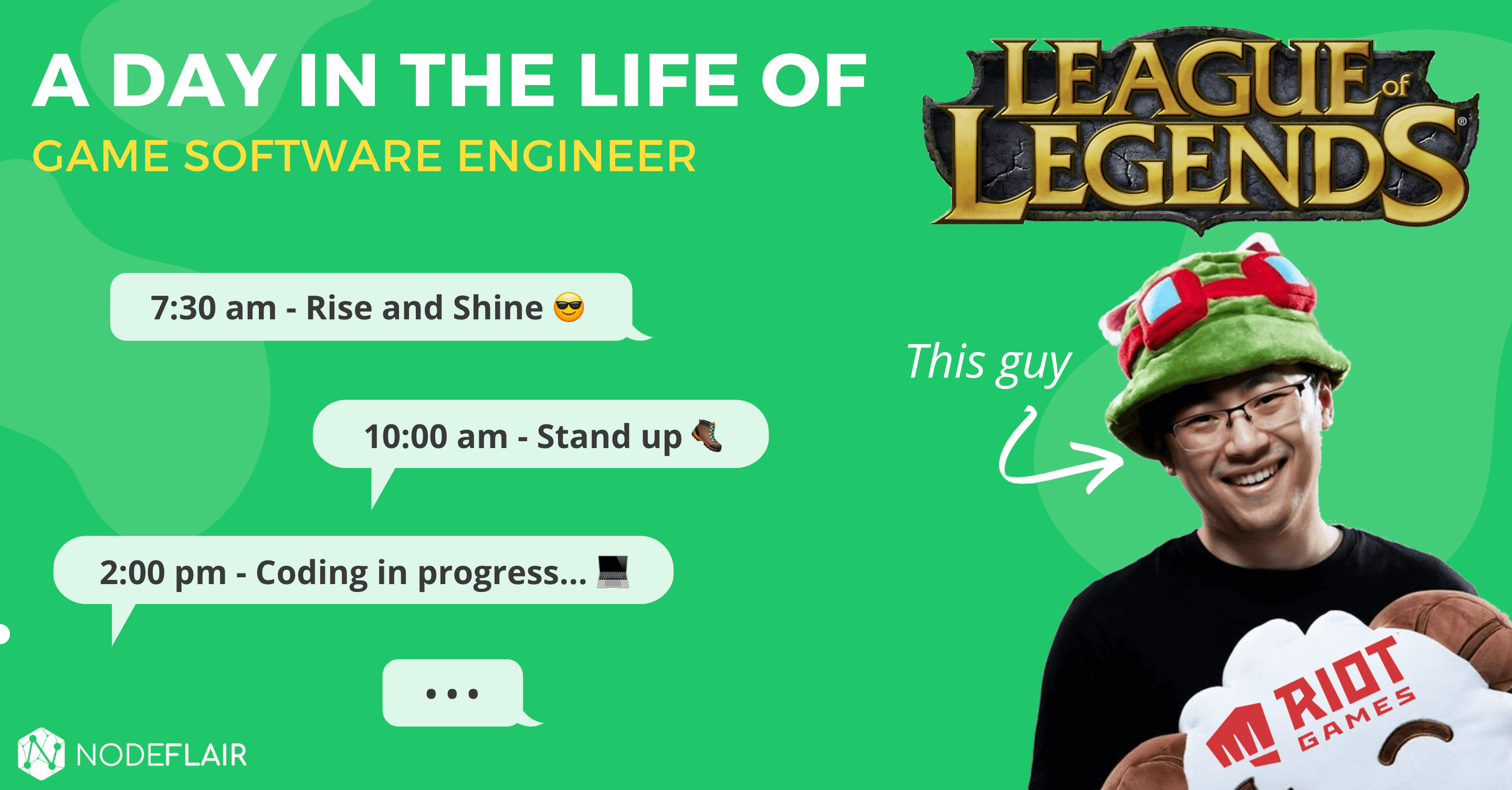 ‍A Day in the Life series provides insight into what it is like to work as a Software Engineer in different roles and companies, by following developers through a regular day at work.

What is it like working as a Game Developer? Follow Kenny Chong through his workday to find out!

Hi! I’m Kenny, a 31-year-old Software Engineer at Riot Games Hong Kong and Singapore. I’m responsible for building and improving the tools that other developers use to create the amazing content that we put out for League of Legends and Team Fight Tactics - such as automating data synchronization systems and ingame features like visual interactions with characters. I mainly work with the programming languages Python and C++.

League of Legends is launched by Riot Games

Riot Games was founded in 2006 to develop, publish, and support the most player-focused games in the world. In 2009, we released our debut title, League of Legends, to worldwide acclaim. League of Legends has gone on to be the most-played PC game in the world and a key driver of the explosive growth of esports!

As League of Legends enters its second decade, we’re continuing to evolve the game while delivering new experiences to players with Teamfight Tactics, Legends of Runeterra, VALORANT, League of Legends: Wild Rift, and multiple work-in-progress titles. We’re also expanding the world of Runeterra through multimedia projects across music, comic books, board games, and the upcoming animated series Arcane.

My road to becoming a game developer started off with a love of video games - of course! Being able to enjoy a world with interactions that are impossible in real life is a huge draw for me. I started playing video games when I was 6 and was consistently blown away every year by games created by various developers thanks to the ever improving graphics, gameplay and sound design. Something I really appreciated in these games and spent a lot of time on is the ability to modify it, either by a built-in level editor, or by changing some of the files that the game shipped with. That is what sparked my interest in game development as a career.

I have been working with game-related projects since 14 years ago, and studied game development in both my polytechnic and university, graduating with a diploma in Game and Entertainment Technology (now Game Design and Development) from Temasek Polytechnic, and Bachelor of Science in Computer Science in Real-Time Interactive Simulation from DigiPen Institute of Technology Singapore respectively.

Prior to my education at Temasek Polytechnic, I was involved as a 3D Artist working on a multiplayer first person shooter game called Red Alert: A Path Beyond, which back then was a modification of the game Command and Conquer: Renegade. Before starting my studies in DigiPen, I also joined the startup PlayFury, where I worked on a couple of mobile titles as a programmer and game designer. It was after DigiPen that I joined my first big international company, Ubisoft Singapore, working on the AAA game Skull and Bones as an engine programmer. After 4 great years in Ubisoft, I relocated to Hong Kong early last year to join Riot Games Hong Kong, before returning to Singapore to help kickstart the Singapore studio here.

Rise and shine! My baby is usually awake for an hour already and would be starting to demand for breakfast and morning snuggles. After attending to him, I will complete my morning rituals and grab a bite before jumping into a video call with my fellow Rioters in Los Angeles. I might be in the Singapore studio physically, but we still sync up regularly with our colleagues across the world on the progress and direction of our projects.

At the moment, the Singapore studio is fully working from home aside from essential staff. Thanks to our IT department, we have our hardware and software sent to us at home. We are also able to reimburse expenses for certain items such as chairs or tables to improve our WFH experience!

This is the time where my team will have our daily stand up meeting. We will discuss what we did the previous day and what we are going to be working on today. It is also a great time to remind or update the team on any upcoming events, or to ask for help if a task needs additional support. After the stand up meeting, we will sometimes break into smaller groups to discuss the topics we are tackling in more detail.

Riot Games is a company that strives to be the most player focused company in the world. Everything that we do, be it engineering, art, sound or design, has to answer the question of whether it will benefit our players’ experience. My team will set ambitious goals but we will work hard together to achieve that high bar we have set for ourselves. We will make sure that every one of us is well supported to take on our objectives.

We also spend time playing our own games because we are gamers as well! Understanding our players is extremely important and knowing the successes and flaws of our games can help to bring even more value for our players. As game design is very nuanced, being able to empathize with players is important as what you might think will work well during development can end up not being received well by players and vice versa.

My stomach is ready for food at this time! Before covid restrictions, I would grab a meal with my team but these days I would just be eating home cooked food. If there is time, I would boot up League of Legends and play a match with my teammates. I play the champion Miss Fortune!

My afternoons are when I sit down and start doing hands-on work such as programming, architecture design and code reviews. If I am coding and things go well, usually a small testable part of the project will be implemented and I can write unit tests to ensure it is in working order. And when that is done, I will put it up for review. It is important that I should try to have a review up at the end of the day as Los Angeles is in a different time zone and I will want my counterparts to review my code when they start work.

I am currently working on some Research and Development projects for Team Fight Tactics and exploring what can be done in this space. It is interesting to see all the pitches from various Rioters, ranging from small ideas to absolutely crazy ones. One thing that we constantly keep in mind as we are trying out something new is that the product needs to increase player value. After all, we are making a video game and we want the player to be engaged by our creations. I am constantly impressed by the work and ideas generated by the team - ideas which are initially thought to be near impossible to implement but ended up being possible thanks to the hard work from some individuals. It encourages me to do my best in order to create the best possible product for the team and our players.

As the studio is expanding, the scope of our projects can grow. This increased scope may be an issue, especially when there are unknowns involved. On top of that, knowing that there are many people relying on us to succeed can be overwhelming. Thankfully, the studio and its people are incredibly supportive and helpful. There is always someone to talk to and guide me if I ever run into any problems. The company also encourages us to take some time off for ourselves if we need to, and thanks to the unlimited paid time off policy, I do not need to worry that I am using my annual leaves unnecessarily.

It is almost the end of the day! I would wrap up whatever I am working on and add notes on where to continue when I pick it up again the next day. I will do one last check with the team to ensure everything is good before shutting down the work computer.

Making a game is a multidisciplinary subject where many different crafts come together. If you’re interested in becoming a Game Developer, not only do you need to know your own craft well (in my case, engineering), you must also be able to work well and communicate with other departments such as art and sound. Try to understand how the different systems work together and the product as a whole. Ideally, the game you are making is also one you are playing because only the player really knows whether the game is fun or not.

Now that work is finally done, I will bring my baby to the nearest playground and play with him for the next hour before returning home for dinner and some League of Legends with friends and colleagues!

And that is what my day looks like as a Software Engineer at Riot Games!

Low-balled on salary during offer?

Join our growing community of 800+ tech talents who have already submitted their salary data. Put an end to the opaqueness here in Singapore and bring the power back to yourself!

Community
|
Experiencing the Future of Business Finance with Aspire’s Head of Engineering, Jarek Tkaczyk
Head of Engineering for Aspire, Jarek Tkaczyk, shared with us some insights such as the unique challenges that Aspire faces, and what he looks out for in a potential candidate!
Community
|
Money made simple with Technology: An interview with Chief Technology Officer of Singlife, Ned Lowe
Insurance is a traditional business, imagine trying to digitize and simplify that process! Ned Lowe shares more about some of the challenges he faces as the Chief Technology Officer at Singlife.
Community
|
Engineering a clearer future with Lenskart Singapore's Engineering Lead, Gibson Tang
Gibson Tang has close to 20 years of experience and was also the first Engineering hire for Lenskart Singapore. Read on to find out some valuable insights in this #AMA session.