Ninja Van and Carousell: A tech insider into what makes these Singaporean companies successful 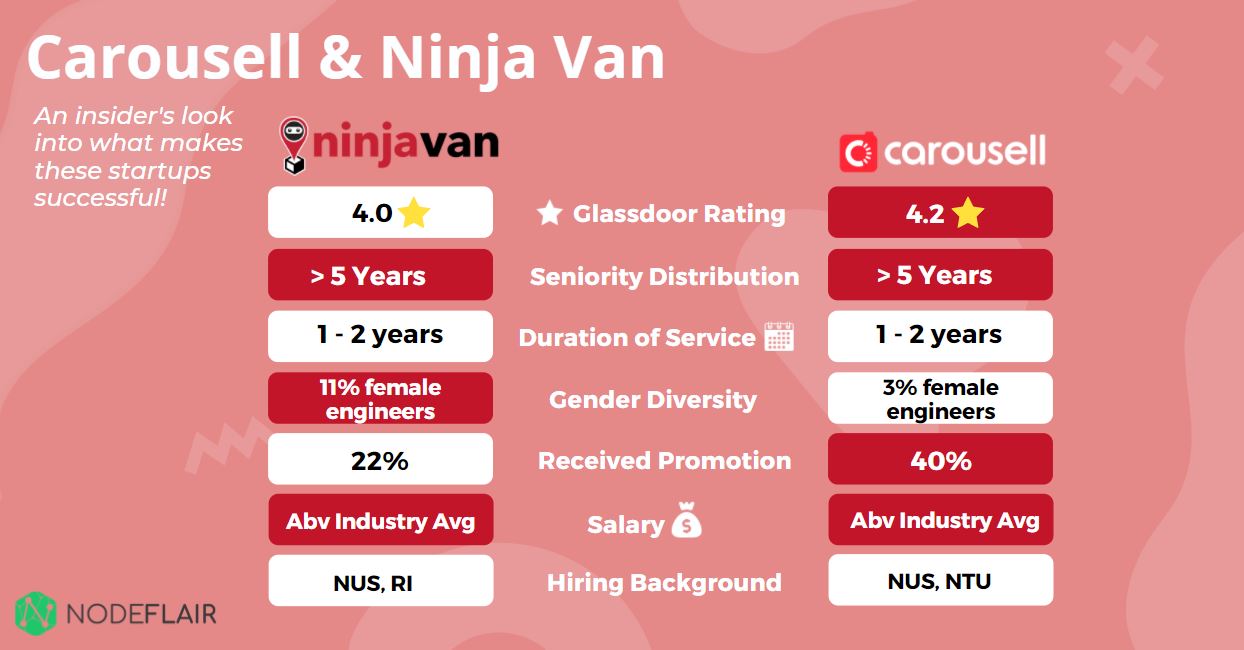 According to Forbes, Carousell has raised ‘US$100 million in a funding round led by South Korean private equity firm STIC Investments’, bringing its valuation to a whopping US$1.1b, making it Singapore’s newest Unicorn.

Ninja Van on the other hand, ‘raised US$578 million from investors’ in it’s latest round according to an article by The Straits Times, bringing it closer to a US$1b valuation.

That being said, the essence of every company is in it’s workers. To quote Hubble’s Head of Engineering, Julius Uy in an interview he did with NodeFlair, ‘Take care of the people, and they will take care of your company’.

Let’s take a dive into some of the statistics for Ninja Van and Carousell, and see what it takes to gun for a US$1b valuation for a startup!

A window pops up, explaining the data source, methodology, etc

Both Ninja Van and Carousell score relatively well for their Glassdoor Ratings, coming in at 4.0 and 4.2 respectively. While these ratings are closer to the perfect 5, it’s still an A minus, and not an A. However, this is a good sign if you’re looking to join either company!

Ninja Van and Carousell are made up of seniors with around 5-10 years of experience, with a good number of super seniors (>10y) to steer the rocketship in the right direction.

Our takeaway from this is that both teams rely on experienced tech talents to get them to their goal (sorry fresh grads).

Duration of Service of Ninja Van and Carousell employees

Based on the data above, Ninja Van and Carousell seem to be rapidly growing their Tech team rapidly within the past two years, with a majority of their team members having been with the company for less than 2 years.

Comparing this data with their seniority distribution, it can be inferred that both companies have been trying to grow their tech team by hiring talents with more experience (>5 years).

Perhaps this could be one of the factors to them being able to gun for that US$1b valuation.

Gender Diversity can be indicative of a positive working culture.

In this case, it seems that although both companies have a relatively low percentage of female engineers in their teams, Ninja Van seems to have a better percentage than Carousell.

The data on NodeFlair Insights only reflects title changes amongst the tech team, which usually correlates to a promotion.

In this instance, Carousell promotes their Tech Team more than Ninja Van does, leading the comparison by 40% compared to the latter’s 22%.

Besides, both companies should be expanding their teams given that they’ve recently both had successful funding rounds. If you’re looking for a new job opportunity, be sure to stay tuned for updates from these companies!

Both Ninja Van and Carousell seem to hire people from a variety of backgrounds, but it can be observed that both companies have a preference for local NUS grads.

Even though Carousell is valued more than Ninja Van based on the reports shared at the start of this article, they have a smaller Tech Team headcount compared to Ninja Van.

One thing’s for certain though, if you’re looking to grow fast, you’re gonna need enough of the right hires to take you there, and it seems that both these companies are doing just that.

How much does Ninja Van and Carousell pay it’s tech team?

Based on our real-time Market Insights feature, here are the average salaries for Software Engineers, QA/Testing, and Cybersecurity Engineers in the industry.

With this in mind, let’s see how Ninja Van and Carousell fare.

Based on the data shown above, both Ninja Van and Carousell are paying their Software Engineers above the industry average, which is a good sign.

Do bear in mind that the green data shows verified salaries from NodeFlair Salaries, while the other data are pulled from various sources on the web, which means that it’s only an estimate and we cannot confirm its accuracy.

Ninja Van and Carousell, what makes them successful?

Based on the comparisons above, we can make a few assumptions about what makes Ninja Van and Carousell successful.

Let us know what you think about this piece on any of our social media platforms!