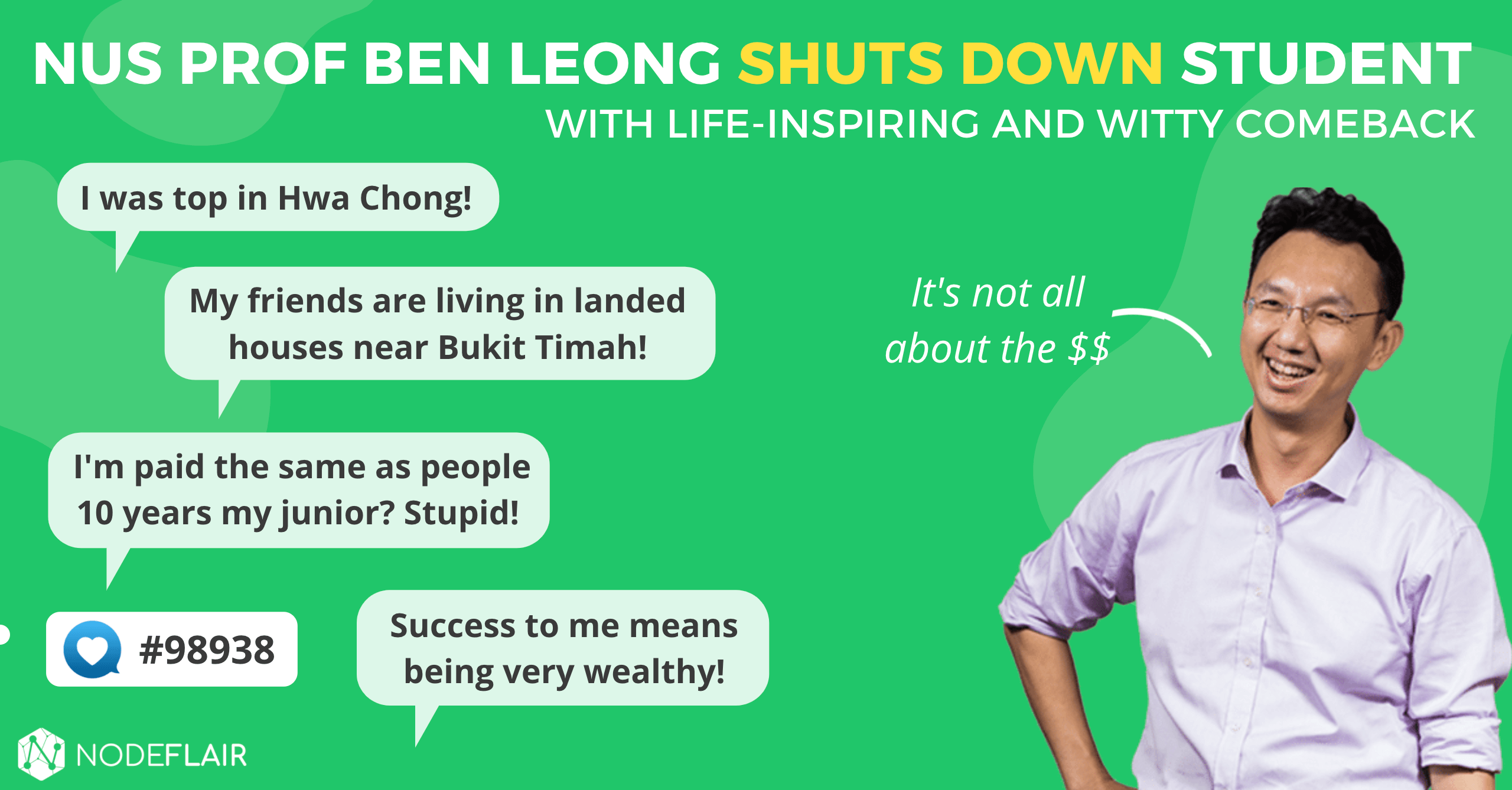 In recent events, an anonymous user or original poster (OP) on NUSWhispers Facebook Page has submitted a confession to the renowned Prof Ben Leong at the University of Singapore (NUS). He teaches Computer Science at the School of Computer in NUS and is known to participate in NUSWhispers’s page by leaving comments under selected confessions. The post has garnered over 600 reactions and 230 comments. It’s also highly shared across Facebook, surpassing 900 shares.

So, what’s the Purpose of This Confession?

This confession sure leaves a lasting impression but a negative aspect to the majority. There are many emotions portrayed in this post, from arrogance, envy, jealousy to detestation, it seems like OP had harboured some hope that Prof Ben would've agreed and supported his/her thoughts. Spoiler alert: this turned out otherwise.‍

Nevertheless, here are three findings we gathered from this confession:

Money Matters… But to What Extent?

In Prof Ben's first statement, he stated that OP made an assumption that he “had no choice” and can only envy others with his opening question: “Since you were probably at the top of your cohort, do you secretly wish that you “deserve” more success than you have now?”

Prof Ben revealed that D.E. Shaw approached him not once, but twice in his career. He also went on to mention his family members on this topic, particularly his wife and daughter. He admitted that life isn’t necessarily easy from his choices, and he didn’t like money enough to care, so he didn’t pick the better paying job. He also became transparent about his feelings on “mistreating” his family by not making more money (when he can). We truly felt that this is rare, and Prof Ben is admirable in our eyes for not being suppressed by society’s standards in chasing after the never-ending race of earning more money. It’s clear that he lives life on his terms and only needs his validation. After all, how much money is ever going to be enough?

The Hidden Truth Behind Success and Massive Wealth

Defeat. Failure. Rejection. How many of us are willing to go through the hardship and unforeseeable future that comes with entrepreneurship?

Prof Ben surprised us by casually mentioning that his younger brother might be OP’s Hwa Chong classmate. To add salt to the wound, he also said he is running a seemingly successful business and resided in Bukit Timah! Someone like Prof Ben has probably seen many hardships around him and has gone through several himself. He said that his younger brother was poor and miserable and took up to two decades to get where he is today. Prof Ben also explicitly said: “If you think my brother succeeded because he was a "top" student in Hwa Chong, that's rubbish, even though by your definition, he was definitely one of the top students.”

Perhaps, it was a wake-up call to OP that success and massive wealth doesn’t necessarily occur because one is smart or simply deserves it based on their own beliefs. Many people think that they deserve many things, but how many of them can truly give themselves what they deserve?

“A Job Doesn’t Have to Pay a Lot, but It Must Pay Enough.”

We hear many stories and experiences about people’s jobs. Most of the time, they’re complaints and dissatisfaction about work. Once again, there is no “perfect” job. Every job is bound to have its pros and cons. Prof Ben had also outlined two key conditions we can evaluate this:

“We need to have a sense of proportion. Most things don't matter. Some things *really* matter. Wisdom is knowing which is which.” - Prof Ben Leong

It’s clear that self-happiness, mental health, and a happy marriage and meaningful life outweigh monetary and materialistic achievements to Prof Ben. This doesn’t necessarily have to apply to everyone, but it’s about defining what success is to you and being at peace with it. We also can’t help but realise how much Prof Ben has expressed his gratitude and love for his wife.

In the meantime, many people seemed to resonate with Prof Ben in the comments section. It’s no surprise he has gained some new fans!

Most importantly, he ended the post on a good note. He assured OP that he was a graduate of Computer Science, and no matter how poor he might feel, he will still eventually be relatively comfortable.

Here’s a Fun Fact About the Nickname “Proffy”

Once, someone asked a serious question in a confession about why Prof Ben calls himself “Proffy”, and the story behind it.

Our growing community of 800+ tech talents have already submitted their salary data. Put an end to the opaqueness here in Singapore and bring the power back to yourself!

Community
|
Experiencing the Future of Business Finance with Aspire’s Head of Engineering, Jarek Tkaczyk
Head of Engineering for Aspire, Jarek Tkaczyk, shared with us some insights such as the unique challenges that Aspire faces, and what he looks out for in a potential candidate!
Community
|
Money made simple with Technology: An interview with Chief Technology Officer of Singlife, Ned Lowe
Insurance is a traditional business, imagine trying to digitize and simplify that process! Ned Lowe shares more about some of the challenges he faces as the Chief Technology Officer at Singlife.
Community
|
Engineering a clearer future with Lenskart Singapore's Engineering Lead, Gibson Tang
Gibson Tang has close to 20 years of experience and was also the first Engineering hire for Lenskart Singapore. Read on to find out some valuable insights in this #AMA session.