Shopee is hiring over 400 Engineers in Singapore: Here’s an insight into the company 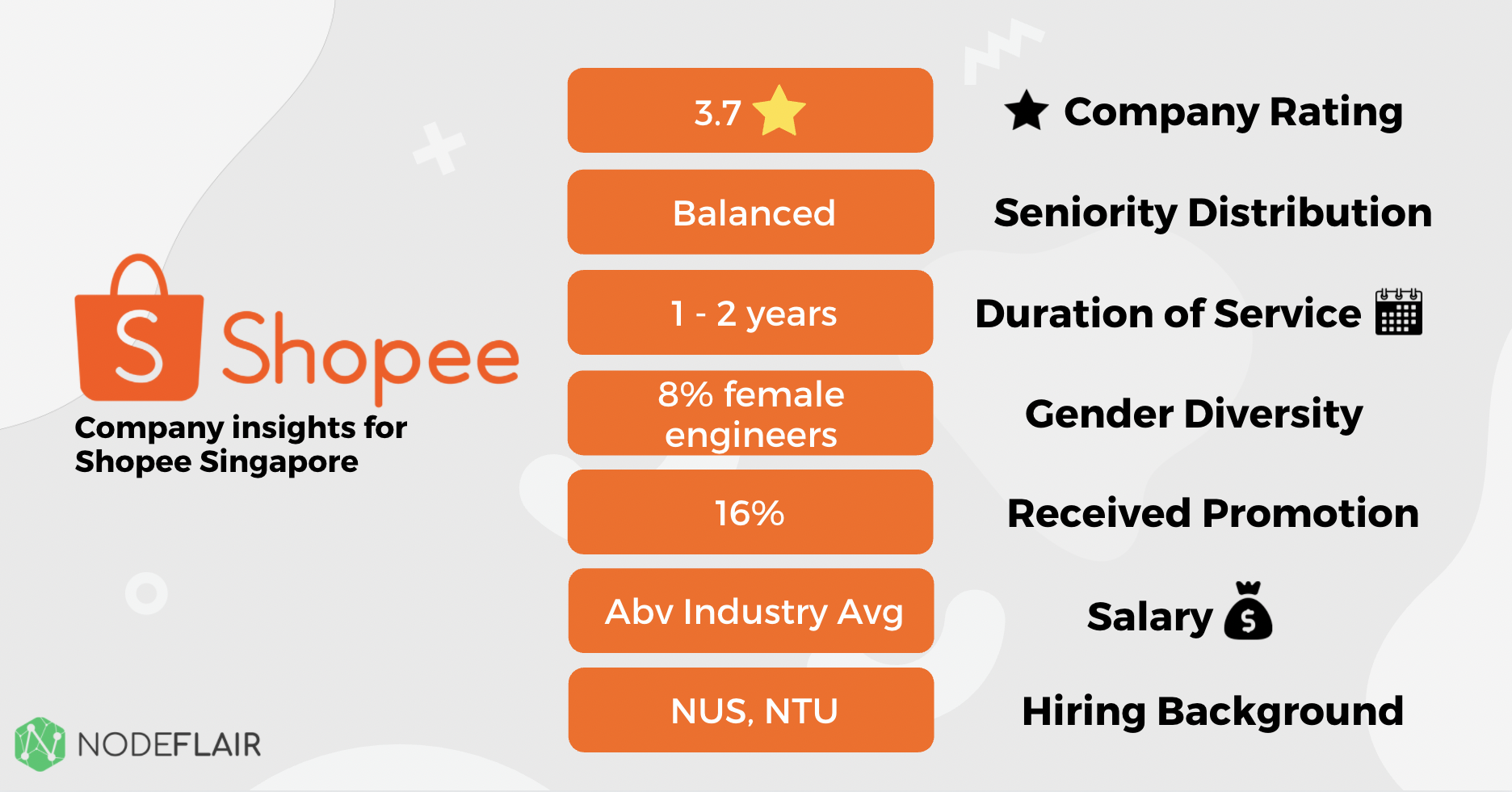 Shopee is ramping up on it’s hiring with reportedly hiring more than 1,600 workers as it attempts to address the shortage of engineering talent whilst facing competition in it’s home markets, as reported by the Business Times.

What does this mean for you as a tech talent based in Singapore? It means that you’re in hot demand, and have the luxury of choosing where you want to work.

In this article, we’ll be sharing the insights that we have on Shopee so that you can make an informed decision before you start applying for your next (or first!) job.

Out of 1,600 reported job openings, we’ve gathered that there are 434 tech job openings in Shopee Singapore.

Imagine having 37 pages worth of jobs just waiting for you.

There’s an abundance of new roles in Shopee to say the least. Stay up to date on the latest Shopee job postings on NodeFlair Jobs.

Here are some of Shopee’s insights that we dived into for this article: Average salary, seniority, gender diversity, promotions, duration of service, tech team headcount, and hiring background.

What is the average salary for Software Engineers in Singapore?

Based on our real-time Market Insights feature, here are the average salaries for Software Engineers, QA/Testing, and Cybersecurity Engineers in Singapore’s Tech Industry.

How does Software Engineer Salaries at Shopee compare with the average salary range for this job?

The average salary for Software Engineers in Shopee is:

Based on these user-submitted salaries (on NodeFlair Salaries), Shopee pays it’s Software Engineers more than the industry average rate.

Submit your salary today to help us make salaries more transparent within the industry!

Click on the button below to submit your salary today!

Shopee’s rating has an average score of 3.7, which translates to an ‘ok’ rating from Glassdoor.

Based on our newly launched (beta) NodeFlair Reviews, the culture at Shopee seems to be fast paced with opportunities for growth, combined with decent pay.

Snippet of an anonymous review for Shopee.

Seniority Distribution of Engineers at Shopee

Shopee’s tech team in Singapore is evenly distributed, which is a good sign if you’re looking to hop on to their cart.

As a Junior engineer, this would mean that there will be plenty of expertise within the team for you to tap on.

As a mid or senior developer, this means that the company is diverse, which is a good sign of a positive working environment.

Duration of Service of Engineers at Shopee

In conjunction with the recent news of their expansion, Shopee has been rapidly expanding its tech team as seen on the chart above.

With around 726 staff members being less than 2 years in service with the company so far, this number is expected to increase with recent news of their expansion plans.

If you’re looking for a job within the tech industry and are looking to grow with your next company, perhaps you should take Shopee into consideration.

Gender Diversity of the Tech Team at Shopee

There are about 66 female engineers working in Shopee, which makes up about 8% of their total tech team headcount in Singapore.

How often does Shopee promote its employees?

Based on NodeFlair Insights, title changes usually correlate to a promotion.

For Shopee, 16% of their tech team members have been promoted, which works out to be about 135 staff members.

We did a comparison article on Shopee last month and they had 790 staff members in their tech team. Today, it seems that they have increased their headcount by 31 members in just over a month!

Shopee seems to have a preference for NUS and NTU graduates. If you’re from NUS and NTU, you might see some familiar faces working in Shopee.

We're on a mission to help you make smarter career decisions.

Check out some of our Salary guides!

Learn all you need to know about Shopee here.

If you find any inaccurate data, do reach out to us here, and we'll be happy to make this article better.