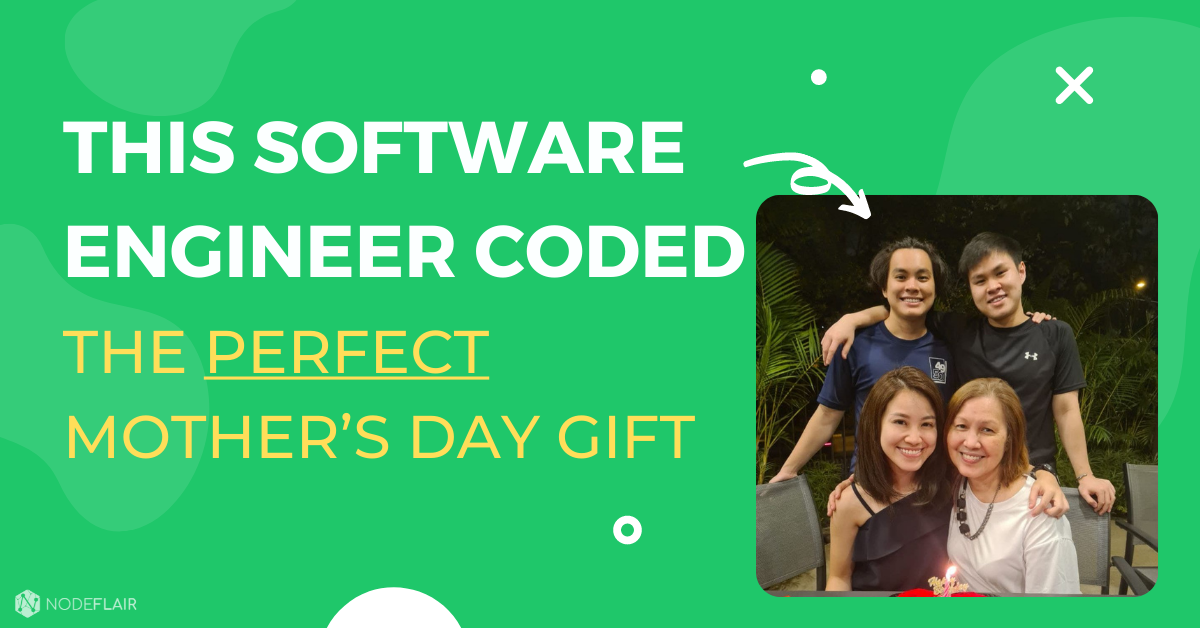 To celebrate Mother’s Day, we wanted to showcase the unique ways software engineers express their love for their mum.

Varick Lim, a software engineer at Grab, did so by creating a Telegram bot that tracked household chores and reminded family members of upcoming laundry duties.

The problem first arose when the family’s helper of 25 years retired in 2018, leaving them to take on the responsibility of doing household chores themselves. Initially, they created an informal system between the family members – Varick, his mother, and elder brother and sister.

However, this system relied on everyone remembering their turn on the roster. Sometimes, Varick and his siblings would forget when they worked or went out late, causing the laundry to pile up.

Varick described his mother, Faith Lim, as “soft-hearted”. Rather than nagging her children to do the chores, she shouldered the load herself.

“My parents separated when we were young, and my mum has raised three kids on her own for the past 13 years,” Varick said. “I felt guilty about forgetting my chores because I wanted to make life easier for her.”

Varick realised the family needed a better system, and set out to create an automated solution. He considered several options, including email and web and mobile apps. But he eventually settled on Telegram because of its ability to create chatbots and its general familiarity with the family.

Varick identified two pain points he wanted to solve. The first was to automatically send reminders of upcoming duties. The second was to keep track of who had performed their chores.

For the latter, Varick added: “We would have instances where someone would miss their duty and someone else would do it for them. The bot needed to account for this in the following week’s roster.”

Although users can create Telegram bots using templates, Varick wanted to “get his hands dirty” and create one custom-made for his use case. He spent two weeks coming up with a prototype, paying special attention to make interacting with the bot fun and intuitive.

The effort paid dividends as Faith quickly learned how to use the bot. More importantly, the bot’s gentle reminders ensured the Lim family performed their duties on time.

“My family tends to avoid conflict. It can be a bit awkward for us to remind each other that it’s our turn to do the laundry,” Varick said. “The chatbot is great because it does the dirty work for us.”

To make the chatbot more fun to use, the chatbot sent a GIF whenever a task was completed. Varick did this by programming the bot to randomly choose a GIF that tagged with the search term “good job”.

“It was important to make it randomised so you get something new each time,” Varick said. “I wanted to build a habit-forming product, and to do that I did something small to make every interaction a new experience.”

After Varick created the chatbot, he wrote a short LinkedIn post documenting his story. To his surprise, the post blew up, attracting over 800 likes. Several people commended his creativity, while others privately messaged him for a link to try the bot out for themselves.

“I was really surprised by the outside interest in the bot. I never intended for it to be used by anyone outside my family,” Varick said. “I’m working on adding the ability to include multiple chores and opening the bot to the public.”

Varick admitted that this chatbot is not a groundbreaking innovation, but it certainly makes life a little bit easier. “This Telegram bot is something small, but it helped my family and I want it to help others too.”

Varick saw his creation as a small act of generosity – a value he picked up from his mother.

“She cares a lot for other people,” he said. “When we eat at a hawker centre, she will tidy the bowls and plates to make the cleaner’s work easier.” During the circuit breaker, Faith put hand sanitisers in the common lifts for all the neighbours to use.

Her selflessness left a deep impression on Varick.

“I try to do the same thing with software – making life just a little bit easier for other people,” he said. “What makes me happy is doing something small to help the community and spread some love.”

Here’s the link to the Household Chores bot if you want to try it out for yourself. Varick is currently working on making the bot publicly available and adapting it for other applications.

Pulse
|
NodeFlair LOVE: Invite-Only Dating App for Developers ❤️
Introducing NodeFlair LOVE: An invite-only dating app for developers in our community to develop meaningful relationships!
Pulse
|
Get Inspired With These 5 Developers’ Work From Home Desk Setups
Get inspired with these aesthetic and productive developer home desk setups as we do a breakdown of the furniture and hardware that best suits your needs.
Pulse
|
10 hilarious TikToks about life as a software engineer
Have you heard of #softwareengineer TikTok? If it hasn’t popped up on your For You page, you may be missing out on awesome tech content.